Hi!  It's Kim from Katydid Cards.  For my project this month, I decided to make a St. Patrick's Day card using a technique I've never tried previously.  Here's the flying easel card I made using the Leprechaun Hat.

But before I share my card, though, I want to remind you about the Freebie of the Day at Miss Kate's. 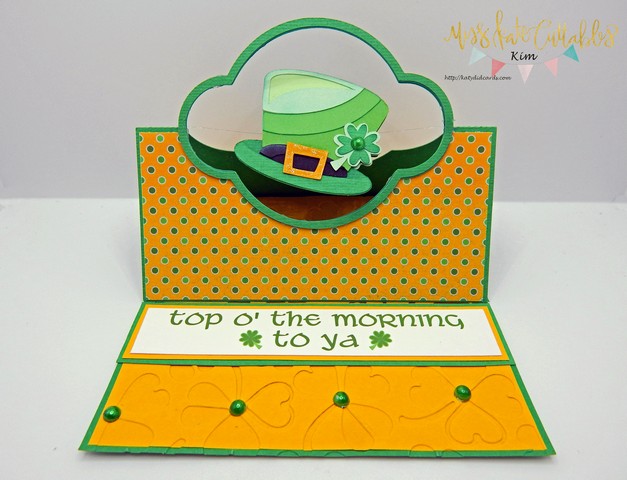 I must have been feeling a little too confident because I decided not to consult any sort of tutorial before making this card.  My thought being, "I've made easel cards before...how hard can this be?"  Well...turns out I learned a thing or two from my mistakes.

I cut the opening and sized my Leprechaun hat to fit.  I ran a piece of clear thread side to side through the center.  Mistake #1.  I should have run the thread top to bottom for two reasons.  First, the weight of the hat pulls down on the thread so the hat is lower than I wanted.  Second, the hat isn't balanced so it wants to tip backward.  I had to add some additional cardstock to the bottom back of the hat as a counterbalance. 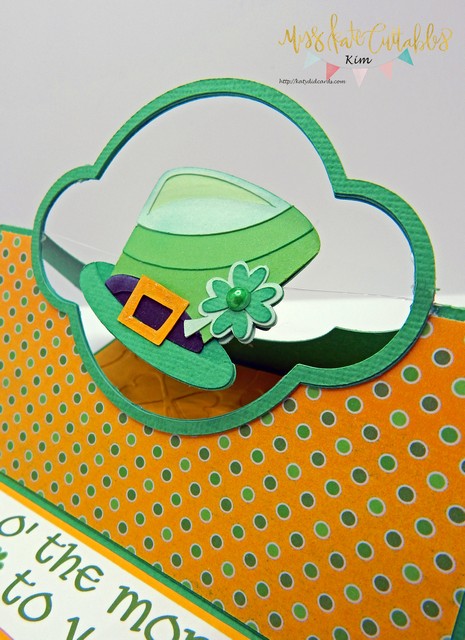 But let's talk about the hat for a moment.  There are lots of luscious layers to this, giving it great depth and dimension.  I used four shades of green cardstocks, complemented nicely by the digital patterned paper.

Here's a picture of the card, folded for mailing...and a confession of yet another mistake.  Mistake #2. 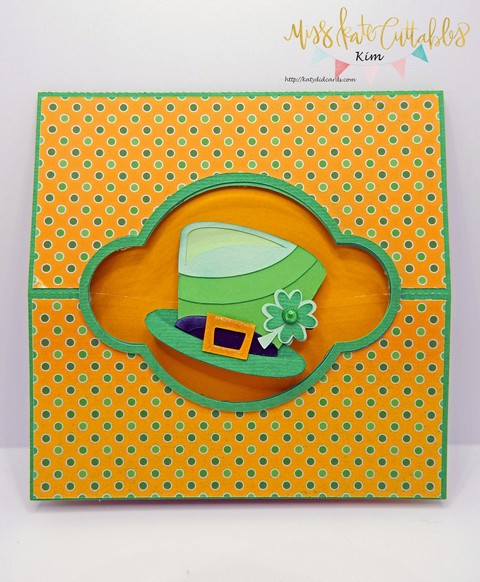 When I cut the opening, I didn't give any thought to what you would see through it...it this case the greeting and sentiment.  As I didn't take that into account, I had to add a separate piece of cardstock.

Here's the card opened, so you can see both the greeting and sentiment matted and attached to cardstock, embossed with the Simply Charmed embossing folder.  I accented the bottom of the card and the hat with Pearl Bling and a bit of Glossy Accents on the hat band buckle. 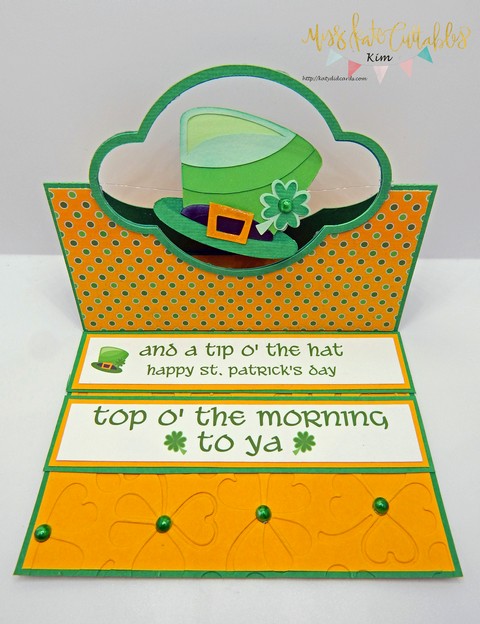 If I were smarter, I would have watched this video before embarking on this card making endeavor.  Live and learn.

Hi, Sue from Sue's Paper Crafts very excited to be here today to show you what I made while I was playing with some files from Miss Kates Cuttables . I live in Arizona and have some pictures from our trip to Tombstone trip to scrap so I used  Miss Kates Westward Ho and Wild West files to work with. I mixed up cuts from both files on both pages.

After getting all of the pieces cut I had fun creating the layouts. In the first picture several members of the group we rode to Tombstone, AZ with got together for one of those old west sepia pictures. I dry embossed a woodgrain look on the barrels but you can't really see it in the pictures. ﻿ 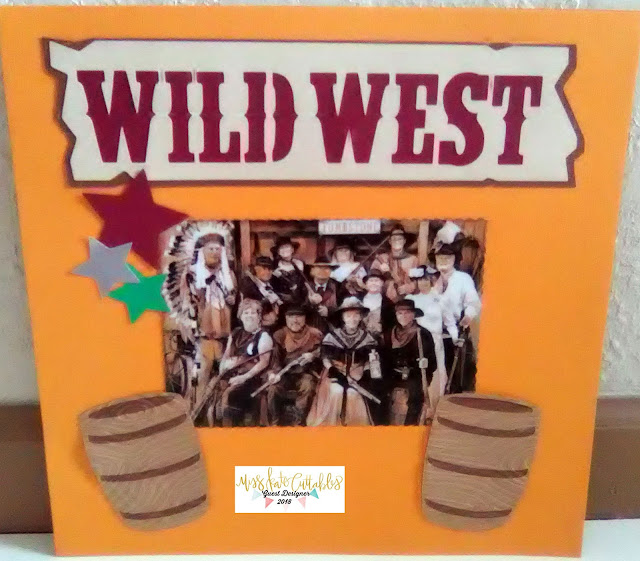 We are right up there in the middle under the, "Tombstone" sign.﻿ 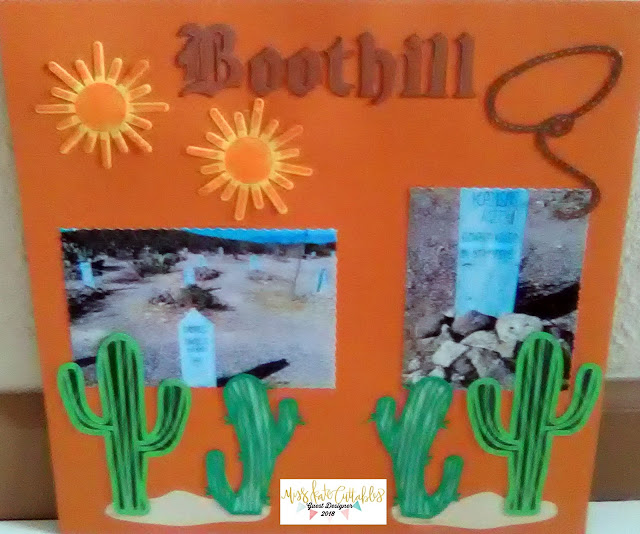 We stopped in at Boothill Grave Yard. There is a lot of history there. Most of the headstones contain the poor soul's name as well as cause of death. Lots of gun fights, hangings and diseases in those days. Many very odd deaths also.

Why the two suns? Because even in mid October in Tombstone it is so hot that you feel that there are two suns bearing down on you. I was going to add some flower blossoms to the prickly pear like cacti but in mid October their flowering season is well over.

If you ever take a trip to Tombstone be sure to take the stage coach ride. It is well worth the $10.00 it costs. They take you around town pointing out where gunfights happened, where the wild women lived, who lived in this house and the history of the house.

We had fun but weren't able to get in everything we had wanted to. One of these days we would like to go back and take the tour of the haunted Bird Cage Theater, the OK Corral and the comedy gun fight down the road a bit.

Thank you to Miss Kate for having me as her Guest Designer.

Jenny from Jen's Crafty Place here with a "LOVE" card.

I know Valentine's day is over but this card can be used for more then just Valentine's day. Anytime you want to show someone you care with a special card, this is the one!

Before I start on how I made this card, don't forget to stop by Miss Kate Cuttables today and every day for your free svg file! 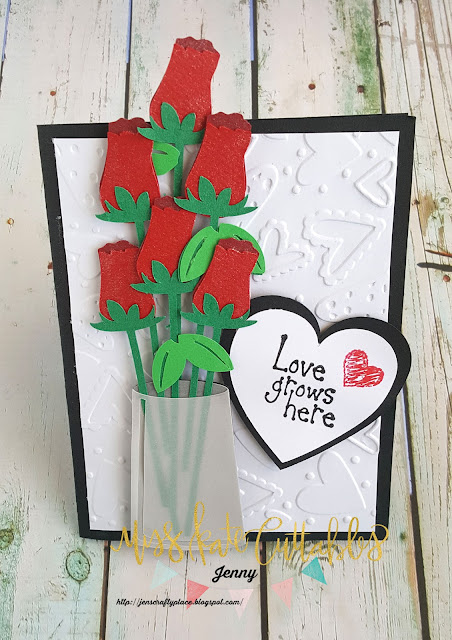 I choose the Miss Kate Cuttables, "Roses in Vase" for my main image. I cut the image out after I sized the image to fit my A2 card. Use your favorite program to size it to any size you wish. You can make it larger for scrapbooking pages and smaller for note cards. Just cutting out one rose can be fun on a note card or love note. I used my favorite program Make the Cut and then saved my svg and imported it into Silhouette Cameo program to cut. 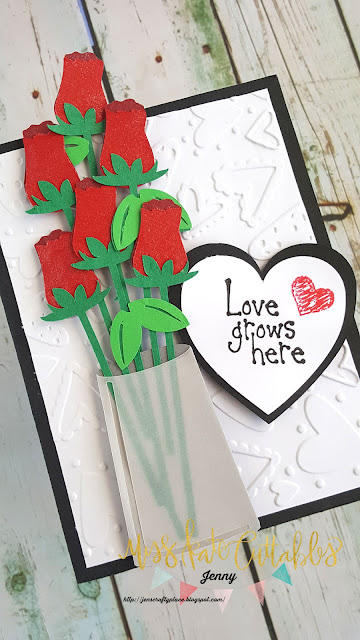 As I mentioned it is an A2 size card meaning it is 4.25 x 5.5 in finished size.  I took a piece of black cardstock 8.5 x 5.5 and scored at 4.25. This is my card base. I then took a piece of white cardstock and ran it though my Sizzix machine with an embossing folder with some hearts on it. This piece measures 4 x 5.25 in. I adhered it to my card front with tape runner. Next, I cut out all my roses and my vase pieces. I used vellum to cut out the top layer of my vase to resemble my glass vase. The heart I used for the sentiment was just a shape I had in my cutting files. I cut that at 2.5 inch and the inner white heart at 2.25 inches. 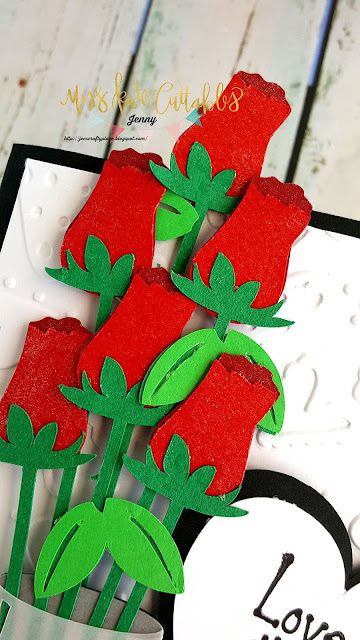 After all the pieces were cut and assembled, I added some shimmer to my roses with a Wink of Stella pen. It is hard to see in the pictures but trust me, they shimmer!! I glued all the pieces together and added it on my card front with some foam adhesive to give it some dimension. I stamped my sentiment on the hearts and then worked on the inside of the card. 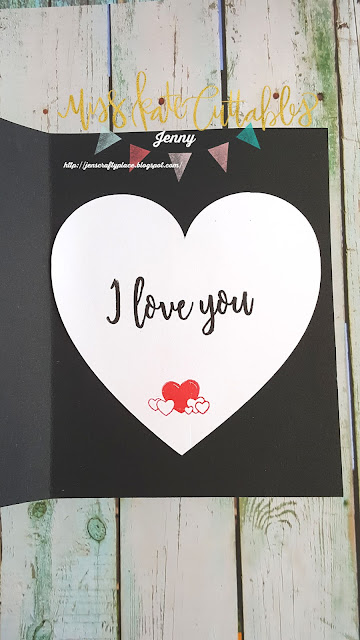 On the inside I cut a white heart at 4 inches to stamp my sentiment. Any stamp set or even a hand written message would be great. 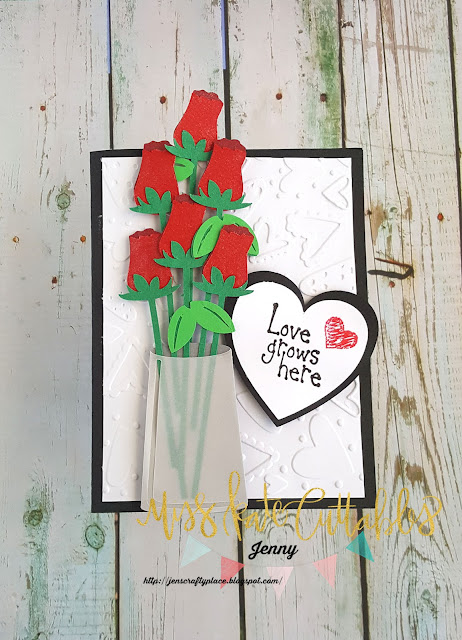 That's it! I hope you like this Love Card and hope you make one for someone special in your life! Happy Crafting!!

I have tons of photos of my son at school and getting lots of awards, and like everyone I am way behind on his scrapbooks, but that is ok, I love how Miss Kate Cuttables files help me get caught up with my albums.

I used red white and blue cardstock because I loved the look and when I add the photos it will be perfect to remember the Star Student Award he received at school. 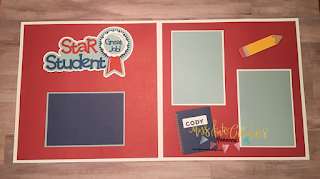 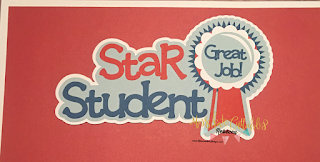 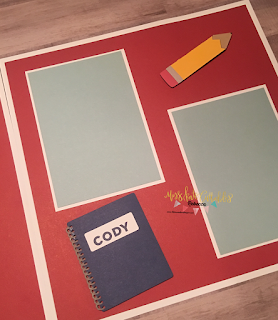 I just love working with the Miss Kate Cuttables Files, they are so fun.

Thanks for stopping by to see my project, Can't wait until next month to show some more fun files!

Strike Up Some Fun Layout

Hello it's Amy McCabe and I'm sharing a layout today.
My son had a fun 12th Birthday Party in 2017 at the local Bowling Alley. He had a blast with all his friends.

Before we check out my layout make sure you grab the freebie of the day!

I used the Strike Up Some Fun Cut file from Miss Kate Cuttables for my layout. 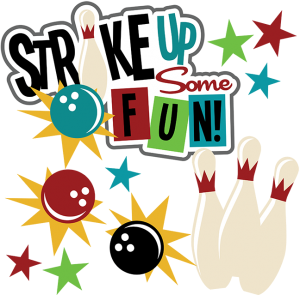 Here's a close up look at the title. Since the color scheme was blue for the party I matched my papers in the title. I used the brown wood grain paper in the background to simulate the bowling lanes. 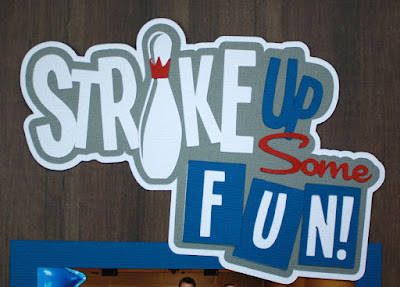 Here is the full two page layout. Give it a click to get closer look.

I used the large bowling pin and added my journaling to it with the pen tool from my Cameo.
I also cut the bowling ball from some funky blueish green paper I had in my stash - kinda resembles the balls at the alley. 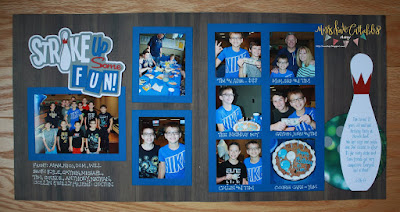 Stop by my blog to check out more of my projects.

Hi everyone,  it's Sherri from The Squeaky Scrapper with today's project. 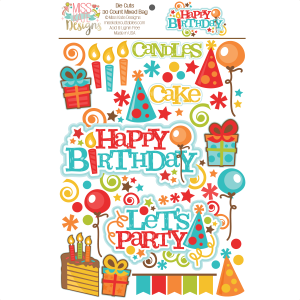 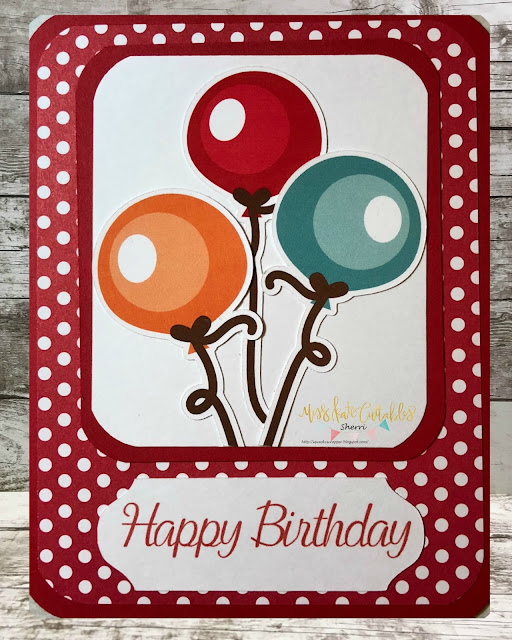 If you'd like more information on how I created this layout, stop on over to my blog at The Squeaky Scrapper and say hello.

Thanks for stopping by today. 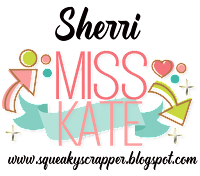 Today I get to be a guest designer for Miss Kate Cuttables! Just love her files! 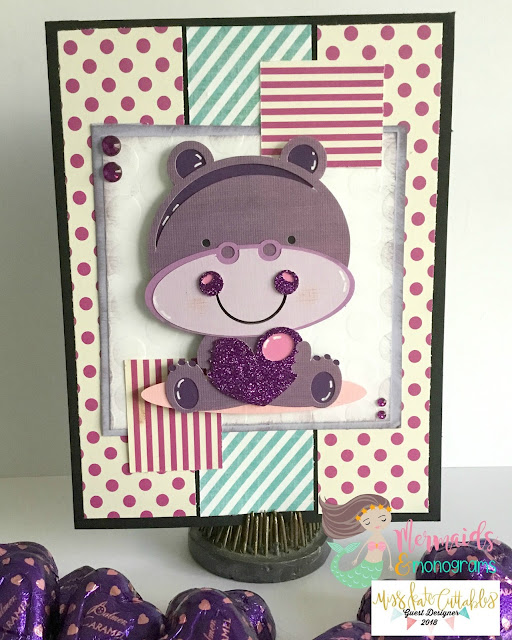 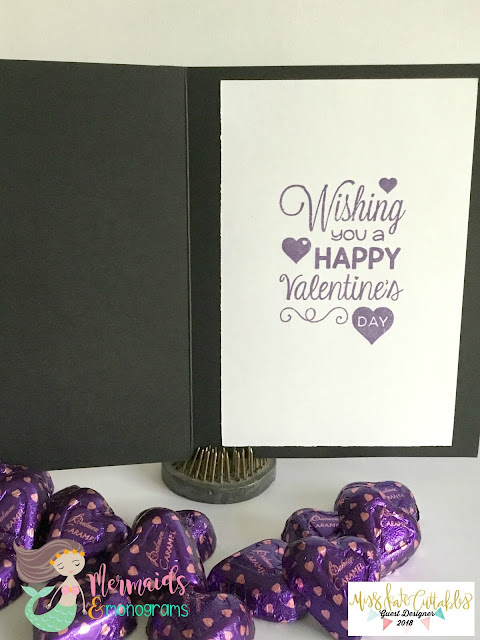 I used a black card base I had on hand, and every single piece of cardstock was from my scrap stash. I love polka dots and stripes together, and thought these worked great together! Added some bling to the corners of the hippo as well. Inside, I added a white background to make writing on easier, and I stamped my sentiment using Jaded Blossoms "Valentine Luggage Tag"

Thanks for taking a peek and Happy Valentines Day!
Posted by Connie Can Crop at 12:00 AM 10 comments:

HI ALL
WELCOME TO THE
MISS KATE CUTTABLES BLOG

TODAY  I HAVE FOR YOU THESE CUTE
LOLLIPOP TREAT HOLDERS 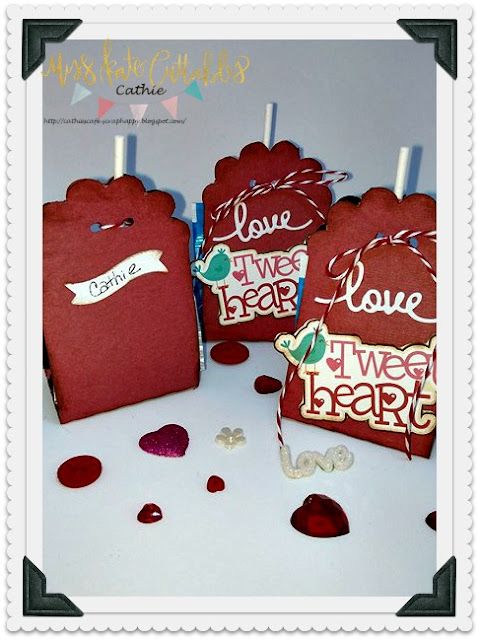 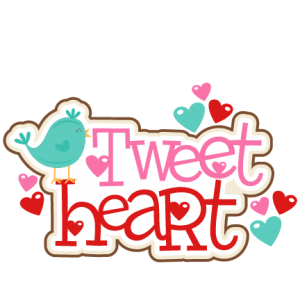 THANKS FOR STOPPING BY